“The phrase ‘domestic cat’ is an oxymoron.”  – George F. Will

Cats are elusive and cryptic creatures, and attempting to understand them is like peeling an onion—you think you have your cat figured out, but you find another layer—behavioral or emotional—to peel away. Rather than feeling frustrated by feline fickleness, our WesVet Animal Hospital team finds their complexity challenging and inspiring. If you’re like us, you’ll enjoy these five fascinating cat facts.

At times, life with cats can feel like a walk on the wild side—and for good reason. According to genome mapping, the domestic house cat shares 95.6% of their DNA with the largest of the big cat species—the tiger. But rest assured your feline friend does not see you as their dinner when they give you their hungry stare, because the two species diverged nearly 10.8 million years ago. In addition to eons, several genetic mutations separate your purrfect pal from the tiger—including metabolic and digestive processes that allow the tiger to sustain an all-meat diet, and its formidable muscles for chasing and taking down prey. So, the next time you feel your cat’s eyes trained on you, take comfort in that 4.4%.

#2: Crepuscular and loving it—why your cat works the graveyard shift

Your cat has good reason to come alive at night. All cats—domestic and wild—are crepuscular, meaning they are naturally most active in the late evening and early morning. Domestic cats’ hereditary preference for twilight and darkness is twofold. Wild cats use this time to travel and to hunt, because small mammals (e.g., mice and field rodents) emerge, and larger predators—who may compete with or prey on the cat—are at rest. Because domestic cats’ hereditary circadian clock keeps ticking, they often slink around the house, chasing invisible prey, or chowing down during all hours of the night and early morning.

#3: When you wish upon a star—the happiest cats on earth

Disneyland is home to a rags-to-riches story starring a particularly industrious feral cat colony. During the late 1950s, the Disney team began converting the iconic Sleeping Beauty Castle from a backdrop to a walk-through attraction, and workers discovered dozens of feral feline inhabitants already residing in the palatial estate.

Fortunately, Disneyland executives decided to be heroes, and keep the cats around as natural pest control. In return, this all-feline workforce receives the royal treatment—each cat is spayed or neutered, and provided with comprehensive veterinary care, feeding stations, and rest areas. Because fraternizing with the guests is strongly discouraged for safety reasons, Disneyland employees identify and rehome overly social cats, and kittens born on the property.

#4: Who needs a spork?—Your cat’s tongue acts as a utensil

Cats’ tongues are covered in tiny backward-facing barbs (i.e., papillae) that are rough to the touch. These fork-like projections help domestic cats groom themselves, and help wild cats clean their plates—so to speak—as their tongues act as rasps, separating their prey’s meat from bone. Because feral cats must catch and eat multiple small meals per day to survive, gleaning every bit of meat from their prey is more than fastidiousness—cats’ tongues are designed for their survival.

After eating, cats groom their paws and face to remove every speck of food matter, which helps prevent their predators from tracking them down through a whiff of fresh meat.

#5: Nine lives to live—myths about cats 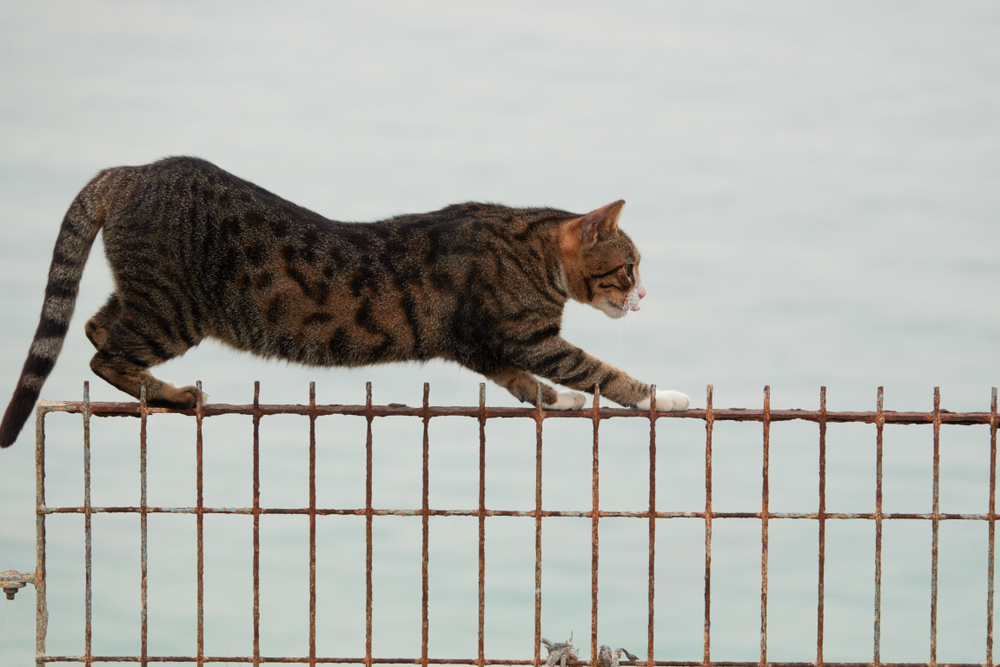 Worldwide, cats are said to have more than one life, with seven to nine being the most common myths. And while each culture sets a number, most agree our feline friends have an otherworldly existence that defies the normal boundary between life and death.

Although the origin of cats having nine lives is uncertain, most hiss-torians attribute the popular concept to ancient Egypt. According to Egyptian mythology, the sun god Atum-Ra took on a feline form to visit the underworld. During his four-footed expedition, Atum-Ra birthed eight other gods—giving rise to the idea that each cat has nine lives.

Despite other estimations—Arab countries believe cats have six lives, while Spanish-speaking countries propose seven—nine remains the most common, perhaps because nine is considered to have mythical power, and holds sacred value in Greek and Chinese cultures, and in Christian and Hindu religions.

No matter what you believe, one thing is certain—your cat deserves the best possible care for every lifetime, and our WesVet Animal Hospital team provides exceptional feline medicine for every life stage—from cute kitten to stately senior. Our team’s cat-like curiosity for feline behavior and health means we’re committed to delivering the most current care for your furry friend. Contact our team, or visit our online portal to schedule your cat’s next appointment.